This innovation addresses the need for a high-resolution digital elevation model (DEM) of the entire terrain of South Africa. Unlike other commercially available DEMs, SUDEM provides an accurate, high resolution DEM of the entire terrain of South Africa. Data verification and error correction tools overcome the problems experienced with input data such as attribute errors in digitized contours and spot heights, spatial errors such as gaps and mismatching contours at the edges of map sheets, and certain voids in the SRTM DEM, resulting in a continuous, seamless DEM with minimum “edge effects.”

By using a combination of algorithms, an intermediate DEM is produced by interpolating a high-resolution DEM from contours and spot heights of the various data sources. The intermediate DEM detects and corrects even the slightest of errors in the data, such as errors in the digitized contours and spot heights, spatial errors such as gaps and mismatching contours at the edges of map sheets, by way of an automated method. The elevation data from the different sources are fused in such a way that “edge effects” are minimized.

SUDEM provides a DEM having the following unique characteristics:

A PCT application (PCT/IB2013/05117) has been filed and it has already been licensed. The methodology is completed and tested. 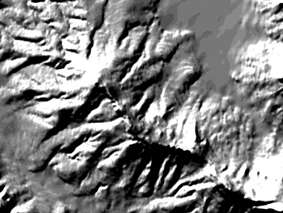